OR, Singing Out Loud and How I Learned to Change a Bumper

Whoop whoop!  I'm getting ambitious again, watch out!  This week I have BOTH the Monday Mingle (from Jen @ EightyMPHmom) and the Memoir Monday (from Travis @ I Like to Fish)!

Also you guys, apparently everything in my life is either "awesome" or "amazing" lol.  Sooo....for next week my goal is to use neither of those words.  My vocabulary is really much wider than that, I promise. :)  Password for the video is: misadventure.  Enjoy!

Alright! So for my memoir this week I decided to write about the time I changed the bumper on my car.
And to tell you why I had to get into mechanic mode, I have to tell you a little story first. It all begins with a trip home from the bar. Because what good story doesn't, really? So I always have my car with me, even when I'm working at the little summer theatre, where it truly is unnecessary, because I'm lazy. And this means I usually wind up being the taxi back up "The Hill" at the end of the day when everyone is at the bar. (In case you missed my guest post about this hill, go here to see what I'm talking about.) And I'm not sure how it came about, but it became a Big Deal to ride in my trunk. No, that is not a euphemism. I'd just pop the trunk and two or three people would sit in it like a recliner. Well, after about four days of this, I said, "You know, this is really unfair, *I* want to ride in the trunk!" So one of my friends said, "OK, well next time you give us a ride up, I'll drive and you can ride in the trunk!" Deal.
Fast forward a few days later. We're getting ready to head back up the hill, I had my keys over to my friend, some folks pile in the car, another friend and I pile in the trunk, and we head up The Hill. I should probably mention at this point it was about 2 in the morning. We pull in front of the house to let everyone out of the car, I get in the passenger seat, and my friend who is driving says, "Well I'll just pull it around for you and park it." Sure! This entails going around the block, which, nothing can happen in a block right? *crickets* RIGHT?
So in between where we are currently, and where my car would like to be, is a giant parking lot. Made of gravel. My friend is....adventurous....and asked me, "So, can I try something?" Ummm...sure! Why not? Now, I know him, and I should really know better than to give him permission to "try something" in my still-kind-of-new car. Lack of judgement like this is what leads to good stories. And new bumpers.
So we cruise on into this parking lot, and immediately the emergency brake is pulled, and we spin around like a record. On the second rotation, we exited the parking lot....right into a fire hydrant. We actually didn't realize we had HIT the fire hydrant at the time, and didn't get out to check. There was a general, "That was close!" comment before we drove on up, parked my car, said goodnight and went to bed.
Next morning I walk outside and....BAM. There it is. 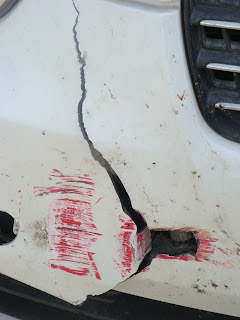 Uh, maybe we were a *liiiittle* bit closer than we thought, eh?

So I showed my friend and he felt awful, way more so than he should have, cause I thought it was HILARIOUS. I mean the last time something hit my car I had to get a whole new car, so you know, a hole in the bumper, that's nothing. Despite me saying everything was ok, he offered to pay for it, which was really nice. And I let him, because it made him feel better and hey, free bumper.
Well I learned that you can get a bumper overnighted and delivered to your door for $65. Cool eh? So now I have this bumper. I had asked my boss where a good place to get it put on would be. His response was, "Are you kidding? You live with a bunch of technicians. I think we can figure it out." Good point sir, good point. And after that my Feminist Mojo kicked in and I was all, "Well I don't need their help, I'll DO IT MYSELF!" And I totally did, ya'll. It took about 45 minutes, and I removed, reassembled, and reattached my own bumper. Oh yeah. I don't know if you're aware, but that makes me a licensed mechanic now. So if you need anything, just let me know. I was a little nervous at first, like I kind of expected it to fall off at any moment. But I've since run over a parking curbs (you know the ones that you can't tell if you're parked close enough until you hear *crunch*) and it's still very firmly attached. The only difference is that they sent me an unpainted bumper, so I have a black bumper on my white car. And I thought about getting it painted, but you know what? I like it. And I'm proud of it. Gives it character. :)

**DISCLAIMER** I would like to say that I DO NOT in ANY WAY condone crazy or unsafe driving. (Unless you are a professional driver on a closed course, then by all means rock it out.) The town we were in is very small, and we were going a total of maybe 4 blocks...which kind of makes the whole incident that much more pathetic.
Posted by Lauren at 10:37 PM

"A black bumper on a white car."

I bet it's way bigger than a white bumper.

Probably didn't like to "go down" into position either...

Nice mingle.
Like the fact you did Memoirs with Travis too. COOL.

I like to pamper myself with a bubble bath too--and a weekend away from the kids. :)

Although i do miss them fierely when I leave.

Hope U have a nice week!

Bubble baths, eh? I don't know if I could get away with it. I'm guessing it would be 10-15 minutes into maxin' and relaxin' before the boys would be pounding on the door, wiggling their fingers underneath the door, etc. Very ambitious post! I'll have to check out the memoirs thing. Have a great week!

Visiting from Travis' and checking out the other MM posts!

Good on you for changing your own bumper. Me, I'm a complete mechanical retard when it comes to vehicles. I'd no doubt attach is upside down or something.

Oh I love bubble baths! That is a super way to pamper.

So YOUR PEOPLE do you taxes? me too : ) I am smart as well, but not so much at math.

Congrats on the 10 lbs - that is wonderful! I know - food is easy to use for pampering. I am guilty too : (

Oooh Walking in Memphis - I love that song too!

Thanks for mingling sweetie!

Support Me! I'm raising money for the Children's Miracle Network!

Lauren
I'm the biggest dork you'll ever love. :) I'm a wanderer. I like to fancy myself an artist, but I'm really more of a "crafter." Just waiting to find out where to go from here.