Sorry guys, I've had some internet malfunctions the last few days, so thanks for standing by.  Last we left our story we were leaving the Arctic Tundra...

Our exit from Colorado was lovely.  We had stayed with Jess' friend as I said, who has a very nice house in an adorable little neighborhood.  When we left the sun was rising over the mountains and bouncing off the houses across the street...it was all very poetic.  Though much warmer than the previous evening, there was still quite a lot of snow left on the roads that weren't main thoroughfares.  As we were turning from our last side road onto the highway, Jess was stopped at a stoplight...on a slight hill.  The light turns green, she hits the gas, and we spin.  Try as we might there was no getting around that one either, luckily we had patient folks behind us.  So when the light turned red again, Jess got out, ran to the back of the car, I jump out, and start to run round to the driver's side, and promptly fall flat on my face.  Sneakers + slick snow + running = comedic fall.  After I managed to get into the driver's seat and the light turned, a little push got us onto the nice paved surface and Jess jumped back into the car.  Impromptu Chinese Fire Drill - check!  After that little escapade we decided to go hunt down some coffee.  This would be a good time to mention that Jess' GPS (whom is called Mandy...at least by the name of the voice that it's set to) likes to take the scenic routes sometimes.  She tells us there is a Starbucks nearby, and we follow her directions, which takes us off the interstate, through a residential neighborhood, across a shopping center, and into a small corner where there is, indeed a Starbucks.  We realize after we got there we could have made the journey with one (maybe two) left turns instead.  But hey, we made it right?
All hyped up with caffiene, we are now officially ready to head out for the day.
Our drive through the rest of Colorado and Kansas was fairly uneventful.  We did make a pit stop to The Mall in Hays, KS (and yes, it's called "The Mall," which is why I capitalized it), where we grabbed some egg rolls and rangoons and went on our merry way.  We arrived at Jess' aunt's house later that evening where we feasted on leftover quesadias and chips and salsa.  As nice as the house was that we stayed at the night before, this was really, *really* nice, and her aunt is the sweetest person ever.
After a very restful night of sleep, we got up and got ready to head out for the day.  Jess' cousins came over in the morning to visit, who are ages 15 months and Brand New.  And they are SO CUTE.  So we had full breakfast, played with the kids, and then set out on our trek to Tennessee.  About three hours down the way we were passing through Travis' neck of the woods, so I coordinated with him and The Missus to have lunch!  As I'm sure you've read on his blog, we tucked in at the local IHOP and had some food and good conversation.  And yes, he is just as funny in real life.  :)  Unfortunately we couldn't stay very long because we had such a long way to go, but it was very enjoyable pit stop.  Thanks guys!
We then motored on through the rest of Oklahoma (...where the wind comes sweeping down the plain, and the wavin' wheat can sure smell swee...*ahem* sorry.) and Arkansas to get to Nashville.  We wound up getting in pretty late, but the hotel was lovely and we settled in with an episode of Craig Ferguson and then crashed.  I do have to mention the hilarious gas station attendant we met in Arkansas.  I was waiting for Jess and buying a pack of gum, and she says to me, "So, cold enough for you outside?"  And I said, "Oh, we're driving from Montana, this is much better than what we left.  It was negative 10 a couple days ago."  And her eyes get the size of saucers and she says, "Fo' REAL?!?"  I wish I could put intonation into that...cause that's really what made it.  I've also taken it and started saying it in my everyday conversations, so thank you BP lady!
That concludes the Flatlands portion of our journey.  Stay tuned for the final installment, Epic Travel Part 3: The East! 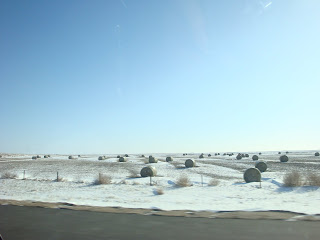 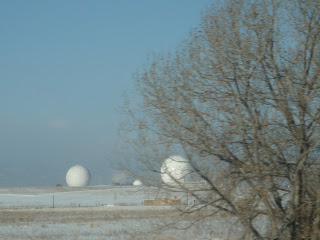 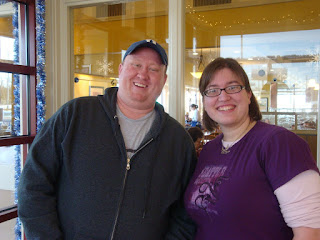 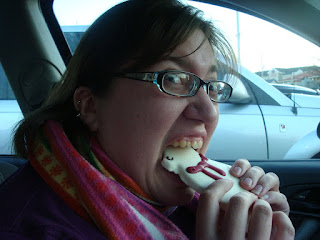 The polar bear cookie I bought from Starbucks meets an unfortunate end.  You might say he became a "molar" bear....*snort*
Posted by Lauren at 7:28 PM

That whole "wind sweeping down the plains" bit?

Hi Lauren,
Now that's the way to eat a Polar Bear cookie. A lady after my own heart. Have a wonderful Holiday season. Looks like your off to a great start.
Take care,
Steve

That's a wicked serious looking bite you've got there!

And that's a seriously eff'ed up trip from Montana to Nashville. You definitely need a new GPS.

What's up with the white balls?

Support Me! I'm raising money for the Children's Miracle Network!

Lauren
I'm the biggest dork you'll ever love. :) I'm a wanderer. I like to fancy myself an artist, but I'm really more of a "crafter." Just waiting to find out where to go from here.